Whoops, almost forgot to put up my last 12 days of anime post. I wasn’t planning on doing this series this year, so forgive the rushed nature of these posts. I enjoyed writing about my experiences with anime this year, and if I’m still blogging about anime next year, I’ll definitely do this again, hopefully with more focus and preparation.

Shirobako, like many other shows this fall season, was a pleasant surprise. PA Works has a reputation as being another Kyoto Animation in my eyes: they typically make good-looking stuff but it’s all moe fluff with nothing else to hold my interest. Shirobako is still pretty moe, starting off with a high school girl club with aspirations of creating their own anime movie, but does a good job of transitioning into a more realistic adult world of office work and stress. I’ve heard some fans of the show claim the workplace drama is “too real” for them. I wouldn’t go as far as saying it’s too real, as the show cushions job stress with good humor and some fluffy optimism, but it’s certainly more honest about the real world than most moe anime I’ve seen.

The last two episodes of Shirobako’s first cour, centered around Christmas time, were standout episodes highlighting the growth of main character Miyamori and the tensions between the young and old generations of animators. One of Shirobako’s major themes is the uncertainty about the future. The young generation worries about whether or not they can make a stable career out of their new jobs in animation, and the old generation worries about the direction of where anime is going. The show strikes a nice balance between the young generation learning from their elders while still figuring out who they are for themselves, and that is exemplified when Miyamori tries to get acclaimed director “Mitsuaki Kanno” to draw some key animation for the final episode of the show Exodus.

Boy, he sure looks familiar.

Turns out “Kanno” is actually an homage to Hideaki Anno, director of Neon Genesis Evangelion. He only gets one scene in this episode, but it one of the funniest scenes I’ve seen this year and a definite treat for anime fans. Normally I don’t like to praise reference humor since it’s usually really cheap, but here it’s in service of furthering the plot and ideas of Shirobako, plus it’s funny more because of how into anime “Kanno” is than the fact that we know he’s referencing Nausicaa. Miyamori admits her knowledge of older anime isn’t that great, having only seen the Rebuilds of “Ava” and never seeing the original series, but her passion for anime is definitely real when “Kanno” brings up Andes Chucky, a kid’s anime she’d seen in reruns.

Since I’m a young adult still figuring out what he wants to do with the rest of his life and an anime fan interested in the industry and culture, Shirobako strikes a good chord with me. As much as I think the earlier episodes leaned too heavily in the optimistic direction, I would think about my future after watching a few episodes. Shirobako balances nerdy passion and dreadful realism. Though it does favor optimism, it never lets itself stray too far into it. Since the show is willing to address actual problems with starting a career, I think it’s allowed to be optimistic. I think Shirobako‘s ultimate goal is encouraging young people to not give up on their dreams, but trying to be a little more realistic about it than other inspirational dramas. 2014 was a depressing year, so Shirobako was a good pick-me-up.

Here’s to hoping that 2015 is another good year for anime. With more JoJo’s and Ikuhara’s lesbian bears, there’s no way it can be bad, right?

In the spring season, the two far-and-away best series (by most viewers’ estimations, anyway) were Jojo’s Bizarre Adventure: Stardust Crusaders and the new season of Mushi-shi. The latter’s new season was vastly superior to even the excellent first, and a lot of people felt the same way about Jojo’s (as I make my way through the first two arcs, I’m not entirely sure I agree with this). Since just about everyone was watching and enjoying both of these shows and they aired on the same day (Friday), they gained their own nickname on Twitter: the “Jojoshi Power Hour.” A lot of it was a joke about what completely opposite shows they were (as I briefly detail here), and how jarring it was sometimes to watch them back-to-back. Yet, a surprising number of us started doing that, including me. Those Fridays in spring were some of the best hours I’ve had in anime-viewing this year.

“Power hours” as a concept, if I’m not mistaken, come from children’s programming blocs (or channels, like Toon Disney or Cartoon Network) that would air two episodes of the same show “back-to-back,” or ones of separate shows that were linked in some way. (At least, I remember those channels describing stuff that way when I was a toon-watching kid.) As an adult, where you’re voluntarily watching these series whenever you want, it’s a fun way to organize your viewing habits. A lot of us grown-up anime viewers also watch a lot of live-action American TV dramas, whose episodes are usually an hour rather than half-hour long. It can be a fun way to keep our attention spans stable across the two media. And when a bunch of people were doing this, it helped ensure you were watching along with everyone else—one of the best things about the proliferation of legal anime streaming. Anyway, 2014 gave us a lot of opportunities for “Power Hours.”

In the summer, there was the Fujoshi Power Hour on Wednesdays, with fangirl-bait Free! Eternal Summer and actual BL title Love Stage both airing that day. I loved both those shows and, with the exception of Free!’s weird (but excellent) streak of more psychological episodes in the middle, they usually hit the same tonal notes for me. So I could easily mix and match them, though Free! coming out a few hours earlier meant it was usually what I watched first. But not always. Sometimes, I just need to wake up my senses on Wednesdays with the clueless baby-gays. 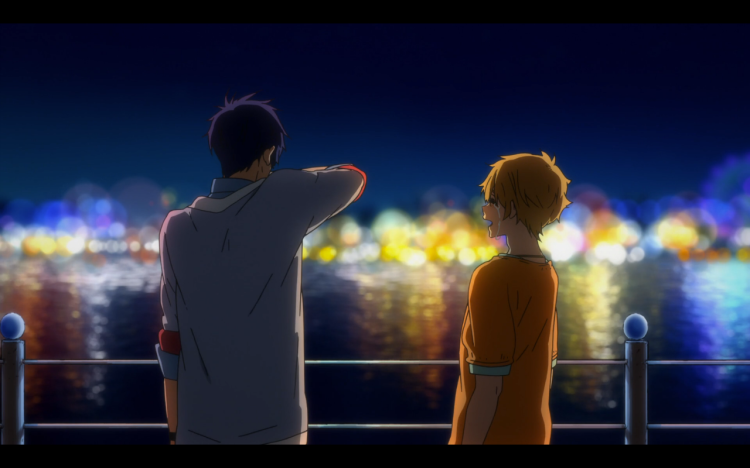 No, not these two.

This season’s “power hour” is the ART Hour on Thursday, when we have Shirobako and Your Lie in April. Both deal with the struggles of young people trying to make it in artistic fields, with a mixture of comedy and drama. (The latter is considerably more dramatic than the former.) This is one I can’t really “break,” per se, because I have to review both shows for ANN. It still makes it kind of difficult to watch them back to back considering their overlapping subject matter, and how much both resonate with my life as a writer and musician. I kind of have to put a few hours’ distance between my viewings of each just to make sure my impressions don’t bleed into each other. I envy some of my friends who can watch them days apart, and not have to go through an existential crisis about their career every Thursday.

With this pair, I’ve been pretty strict about watching Shirobako first, since it airs first and therefore my “deadline” for it comes up first. I’m starting to wonder, though, if that’s really the best decision, especially since I usually turn these guys in with ample time to spare. Your Lie in April’s last few episodes have been very emotionally draining, and now it’s hard to look forward to doing more work with that show if I’ve just been perked up by Shirobako. (At least, that’s how it makes me feel most of the time. It’s pretty good at laying on the pathos when it wants to, but rarely with the devastation that Your Lie in April achieves. Shirobako hasn’t broached child abuse yet, after all.) 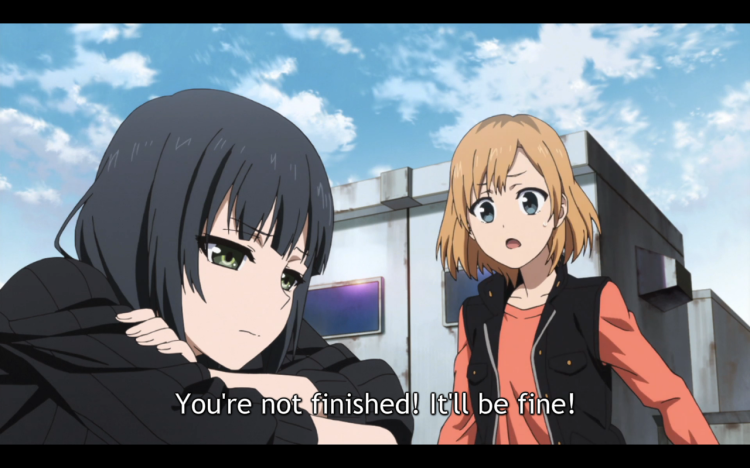 One of Shirobako’s more hurtful moments…

There were less “powerful” hours, too, this year. Saturdays in the summer, Aldnoah Zero and Captain Earth formed my “mecha” hour, and both ended up failures to various degrees. (Aldnoah Zero was at least like watching a trainwreck in slow-motion. Captain Earth was just boring.) That was a slog, and if I got through it, it was just that the “hour” gave me the chance to burn it out of my system really quickly. The things I do for you, anime, and my desire to be a well-rounded anime watcher who’s seen both the good and the bad.

I’m interested to see if the next year will bring with it any oddly similar (or in the Jojoshi case, strikingly dissimilar) shows that happen to be airing the same day, that we can organize these ways. Bring on the winter season and its own power hours!

(P.S. In case you’re wondering why this is so behind, I had a lot of work to do yesterday that left me unable to blog on here. I’m planning to write two posts today to make up for this.)