Sword Art Online II was split into three arcs: Gun Gale Online (the best arc of SAO in my opinion), Excalibur (a three-episode interlude that is mostly just screwing around with Kirito’s harem), and Mother’s Rosario, the only arc where Kirito is not the main character! I was really sick of Kirito, so to see Asuna, a character that’s been largely portrayed as a helpless waifu since Fairy Dance, have her own story was an exciting idea. So of course, her conflict ends up being kind of lame (her mom doesn’t approve of her playing video games oh noooooo). The main character ends up being Yuuki, probably the only girl to ever beat Kirito in a duel (though there’s a bullshit implication that Kirito went easy on her, because we can’t have our tough male badass lose to a girl fairly). Yuuki wants to beat a boss so she and her guild, the Sleeping Knights, can have their names carved into a rock. The stakes aren’t nearly as high as previous arcs until it’s revealed why the Sleeping Knights want their names immortalized in virtual reality so badly: they’re all terminal. Specifically, Yuuki has AIDS.

Oh, and not only does Yuuki have AIDS, her entire family is dead and she’s been confined to a hospital room for almost her entire life, and her only means of communication with the outside world are VRMMOs. The piling of “sad moe girl” tropes, all in one episode by the way, was so comical in its execution that I knew that I had to write about it for 12 Days of Anime. Sword Art Online has always been a soap opera for male nerds in the same vein that Clannad is. They create male leads that nerds can pretend to be like and give them baby fantasy girls for them to fix and protect. The difference is that Sword Art Online pretends to be an action show, and in its final arc swaps out its male lead for a female lead. Having a girl protagonist could have made for an interesting subversion, but Asuna is much more passive than Kirito, and Kirito is still used to solve a lot of the problems she faces. The conclusion of Sword Art Online II has her saying she’ll be with Kirito forever, proving that the entire point of Asuna’s existence is to be Kirito’s girlfriend and nothing more. Basically, the author of Sword Art Online cannot write women.

Asuna sure is a STRONG FEMALE CHARACTER!

(Content warning: this article includes depictions of molestation and domination)

Sword Art Online was easily one of the most popular and talked-about anime series of 2012. The premise of a bunch of player being trapped in an MMO video game where dying in the game meant dying in real life was enough of a hook to attract thousands of viewers. To be honest, the show lost me halfway through after wasting time discussing game minutia that wasn’t all that interesting and building a harem for the show’s protagonist, Kirito. The show has been around long enough that critics have already had enough time discuss the show’s myriad problems, so what’s the point of digging up old material? With season 2 airing this summer, now is the perfect time to discuss the worst part of season 1, which I just finished last week at the time of this writing. That would be the Alfheim Online arc, the second half of season 1.

The Alfheim arc begins with Kirito’s awakening from Sword Art Online, haven beaten the game and escaped after 2 years of virtual confinement. However, Kirito’s girlfriend and former badass warrior Asuna has yet to wake up despite Sword Art Online no longer existing. The reason for this is that her mind is trapped in a new virtual reality MMO game called Alfheim Online, which is basically just Sword Art Online with flying fairies. In Alfheim, Asuna is literally trapped in a cage by Alfheim’s gamemaster Sugou, who’s introduced in real life smelling the Asuna’s hair while she’s comatose.

This guy is quite the charmer as you can see.

This is the first sign of the major problem with this arc of Sword Art Online. I could complain about how Alfheim is somehow less interesting than SAO, or why people are still playing virtual reality MMOs after the most popular one was responsible for the deaths of many real life people, or the creepy subplot of Kirito’s newly introduced sister having a crush on Kirito, but those complaints could fill up their own articles. Instead, let’s focus on what is easily the most repulsive aspect of Sword Art Online, the depowering and objectification of Asuna.

Sword Art Online’s track record of treating its female characters like people is incredibly poor. In the first arc, every female character exists to be impressed by and fall in love with Kirito because of his impressive combat skills. Basically Sword Art Online is a typical male power fantasy in which the male protagonist that male gamers in the audience can identify with are rewarded with the idea that their video game skills will make girls love them. Basically Kirito is a bland character with no distinguishable flaws or well-rounded personality traits. But within the narrative of Sword Art Online, Kirito is unmatched by other players with the possible exception of Asuna, a player who is a high ranked member of the Knights of the Blood Oath, the most powerful player in the game. She is shown as being the most capable player in the game next to Kirito. Which makes her treatment in the Alfheim arc all the more frustrating and illustrates that no matter how capable a character she is, by being a girl she must exist only to fuel Kirito’s motivation.

So you know how gross it is that this arc opens with Asuna being molested by Sugou, who wants to marry her despite her inability to consent? Turns out that Asuna being molested and dominated is a theme of this season! Don’t forget the copious crying and struggling either! Yes, the only girl who could possibly be close to Kirito in skill level has no power anymore and only exists to make Sugou look like the worst person imaginable and Kirito look noble for avenging and rescuing her. 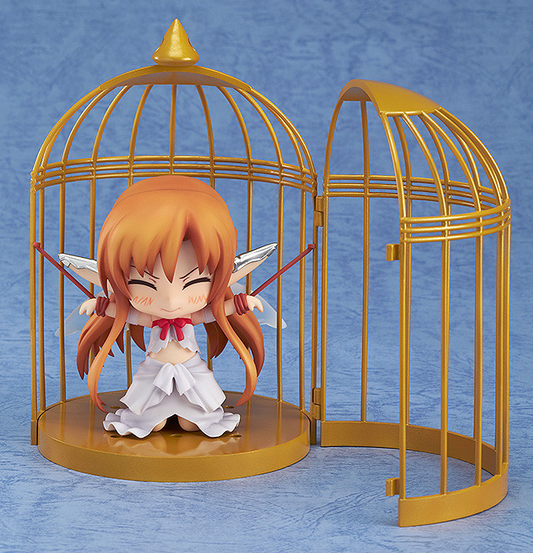 They made a toy depicting Asuna caged and chained. In case you weren’t depressed enough already.

The two worst examples of this occur in episodes 21 and 24. The first is an example of anime’s good old friend and internet punchline, tentacle molesting. During the one time Asuna is able to escape her cage and discovers that Sugou has captured the minds of other SAO players to experiment on, she is captured by two tentacle slug monsters that work for Sugou. During the scene the monsters tell her “stop struggling” and “I’m bored with dolls, but you look like someone I can have fun with!” Cue multiple panning shots of Asuna being grabbed and squeezed with close-up shots of her legs and exposed stomach.

Fanservice is common in Sword Art Online, but until this point it was rarely this exploitative or about dominance. Fanservice isn’t inherently bad. To see positive examples, see Free! – Iwatobi Swim Club. All though Free! is aimed at an audience attracted to men, it avoids the gross dehumanization of Sword Art Online by not being about dominance or control. Free!’s fanservice is shameless, campy, and sex-positive, while Sword Art Online’s fanservice is invasive, humorless, and controlling. Scenes like this in theory are supposed to illicit anger from the viewer at the mistreatment of a character they are supposed to like, but the direction of the scene is erotic. The camera eroticizes the act of Asuna struggling and takes advantage of the situation to showcase her exposed body to the viewer. Asuna, the second most powerful warrior of Sword Art Online, has been reduced to an object to be sexualized and humiliated.

The molestation scene in episode 24 is where the theme of Asuna being objectified to motivate Kirito is the most blatant and horrifying. Sugou chains Asuna, gropes her, and licks her face in front of a defeated Kirito. It’s all a show of dominance. Sugou shows his power over Kirito by hurting his woman. Asuna’s sexual objectification reaches its climax here, and essentially turns the Alfheim arc into a rape revenge story. Kirito gets to play the heroic avenger of his girlfriend’s assault, and not only defeats Sugou at his own game, he humiliates him by magically acquiring admin privileges and reducing Sugou’s level to 1. He emasculates Sugou and cripples Sugou’s real life body by increasing the pain felt in-game to unhealthy levels. It’s okay though, because Sugou deserved it because of his actions according to Kirito. 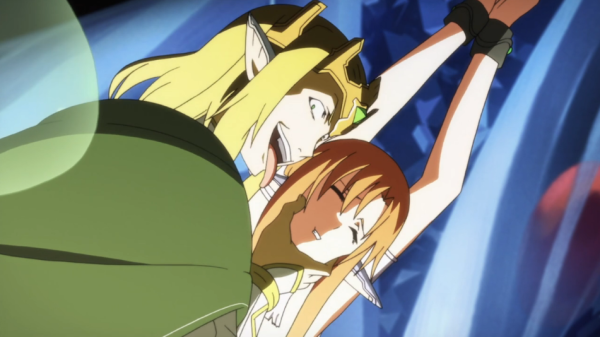 Sugou is objectively a horrible person, but he’s written specifically just to anger Kirito and take away his girlfriend. Asuna becomes just a trophy for Kirito to win back, not a character with her own feelings. The audience that’s meant to sympathize with Kirito ends up thinking of Asuna as an object as well due to the framing of the show, and the show is all too gleeful to encourage the audience to think a submissive Asuna is sexy. In a show where girls are objectified for the audience, Asuna’s objectification ends up being the worse due to both the severity of her objectification and loss of power from the first arc.

It’s important to recognize how narratives that serve to empower the male hero like this end up depowering the girls the male hero saves. Worse, the girls must be put in severe danger solely to motivate the male hero, and the male hero is entitled to love after saving the damsel in distress. That Sword Art Online chooses to use the lazy and misogynist cliché of turning Asuna into a sexual abuse victim is the final straw.

Well, it can’t be as bad as Alfheim Online, right?