Here it is, my very belated final Twelve Days of Anime post for 2014. I meant to post this three days ago, but got swept up in the madness of Christmas with my family. Happy Holidays! Also, full-series spoilers for Digimon Tamers here if the title didn’t tip you off. 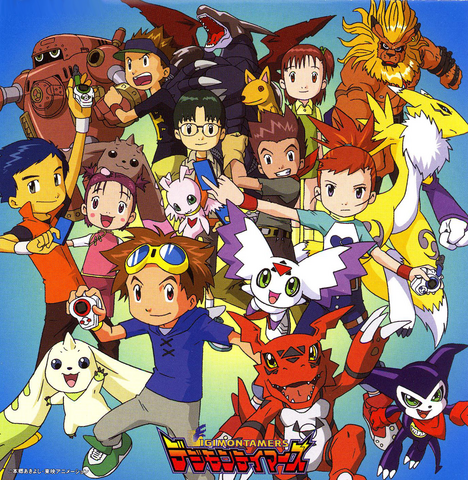 I’ve been a Digimon fan since I was a little kid, but this year was the first time I sat through all of Digimon Tamers, easily the franchise’s best entry. I considered myself “too old” for it by the time Tamers aired on TV in 2001, but I wanted to see it when I got back into anime and heard how good the third installment is from my friend JesuOtaku’s videos about it. I watched it with her and another friend who had previously seen it, and learned how right I was. Tamers had Chiaki Konaka as its head writer, and he brought to it his signature head-trip sensibility and high-concept sci-fi that made Serial Experiments Lain such a classic.

Tamers established a lot of traditions for the franchise, but ironically, it did so in a way that deviated from the usual pattern. One of the main examples of this was killing off Leomon. A Leomon or some evolution of him dies in every single Digimon series (Adventure 02 was technically the exception since that story’s Leomon had already kicked it in the previous installment, but the one that proved the rule), and it’s become an inside joke in the fandom as a result. Yet, while Tamers was the one that made it a tradition, it also made it impossible to laugh at how it killed its Leomon. 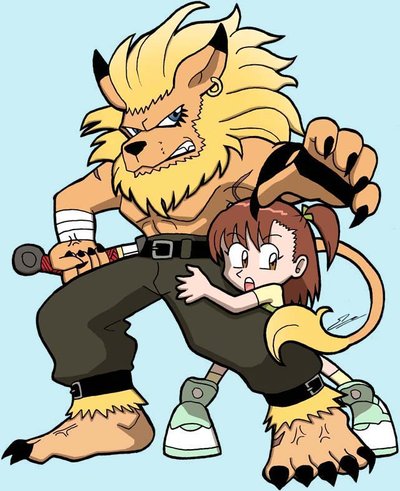 Yeah, he’s really popular with the furries. Why do you ask?

In Tamers, Leomon becomes the partner of Jeri Kato (Juri Katou if you’re watching the sub), a lonely, weird little girl who protagonist Takato crushes on, and who acts like a sort of third (fourth?) wheel to his Digimon card games with his friends Kazu and Kenta. She desperately wants to be a Tamer, collecting all the Digimon cards she can find to fit in with them. Jeri finally gets her wish by essentially the same method she used to win her friends: desperately following Leomon around and begging him to be her Digimon. Eventually, a Digivice falls from the sky allowing her to tame Leomon. She even shows some real potential for it, knowing when to activate powerful cards to enhance Leomon’s powers.

It doesn’t last very long, though, when series anti-hero Impmon—now in his Mega form as Beelzemon—decides to prove how evil he’s become by killing Leomon. In the world of Tamers, unlike Adventure, Digimon deaths are permanent. Jeri’s reaction to this is one of the most heartbreaking moments in the series:

Jeri was a character I related to quite a bit, more than any other Digimon character in the three series I’ve watched from the franchise. Jeri is a lot like I was as a little girl, from her weird social tics to her lonely desperation for friends. And she responded to Leomon’s death the way I usually respond to traumatic things in my life: by withdrawing. Her friends are too busy saving the Digital World to notice her pain, so she’s taken advantage of by one of its most destructive forces, the D-Reaper. Konaka was influenced by Evangelion for many of his series’ more psychological moments, and there’s a lot of Shinji Ikari in Jeri’s depressed mumbling to herself, especially once she’s taken into the D-Reaper’s void. Fans like to talk about “Scary Jeri,” the creepy computer puppet who replaces her, and Jeri’s horrifying nightmares, but I saw her struggle here as more sad than scary. It resonated too much with my own experiences with depression. 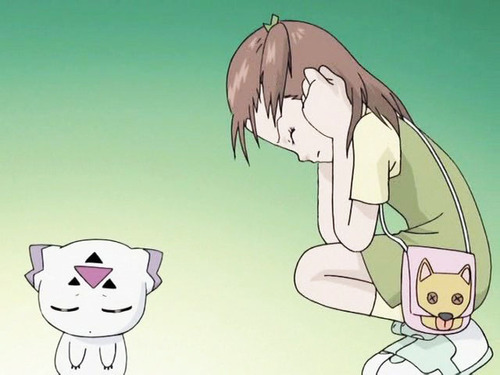 Digimon Tamers is not only my favorite Digimon series and one of my favorite kids’ anime (second only to Princess Tutu, where Konaka also scripted a few episodes), but among my favorite anime series of all time. A big part of my favoritism is its portrayal of Jeri and, by extension, young people struggling with depression and loneliness. All of that hinges on when it made one of the Digimon fandom’s favorite memes into a moment that actually mattered, the emotional climax of the series. Thanks, Konaka! Or, maybe…no thanks. I didn’t ask for this much emotional trauma from a monster-battling show designed to sell toys!

Anyway, thanks everyone for a really great 12 Days of Anime! It was fun to explore my engagement with the medium over the past year this way. I’ll probably have a few end-of-the-year retrospective posts, but other than that, see you in 2015!