I try not to think about organizing my favorite anime into lists. Blogs and websites alike love to make lists because fans like to categorize things from best to worst. My go-to answer for favorite anime for the longest time has been Revolutionary Girl Utena, but beyond that it’s hard to come up with a top 10 or 20 list of my favorite anime ever. It’s rare that I come across an anime nowadays that I would seriously consider putting on that hypothetical list of favorite anime. Yet after watching Kill la Kill three times in a single year, I might consider putting it on that list.

Kill la Kill began in 2013, but it solidified itself as a favorite of both mine and anime fandom when it concluded in 2014. To be honest, when I first began Kill la Kill I was apprehensive about it. Hiroyuki Imaishi is a talented director, but I’ve never been in love with his works. Gurren Lagann was fun but brainless, Panty and Stocking with Garterbelt was one of the least funny comedies I’ve ever seen, and I loathed Dead Leaves. His work is distinct for its manic energy and animation, something I really appreciate, but his stories and characters never came together for me. Kill la Kill started entertaining enough, but its use of fanservice did worry me. Would the novelty of good animation, crazy art, and fun action wear off on me like it did with Gurren Lagann?

Actually no, it didn’t wear off. With each new episode, Kill la Kill improved and showed better writing than any of Imaishi’s previous works. The world and characters of Kill la Kill were far more interesting than Gurren Lagann’s. Ryuko was cool, but had more flaws than Kamina ever did and was able to show some more complexity for it. Mako was hilarious and the effective emotional center of the show, grounding Ryuko whenever she lost her way. The two made such a perfect couple that I’m surprised I didn’t think of them ending up together until the very end. Mind you, I rarely watch anime for shipping, but I did end up getting a little caught up in the Mako/Gamagoori shipping that the fans wanted and the show teased with Gamagoori developing a crush for Mako. 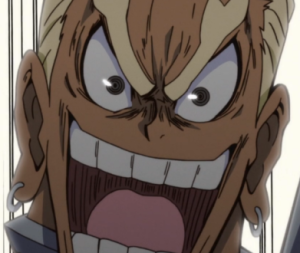 How can you not love this face?

I’m a sucker for good character writing, and Kill la Kill has a treasure trove of likable yet distinct characters. I wouldn’t say they’re as complex as, for example, Gen Urobuchi characters, but they all fulfill their different roles and are oodles of fun to watch. My heart goes out to Gamagoori, who was always entertaining but solidified himself as one of my favorite characters after seeing him transition from antagonist to hero. The rest of the Elite Four goes through this transition as well, but for some reason Gamagoori felt the most developed out of them. Blame it on his crush on Mako, or blame it on him being the funniest, he became one of the most endearing characters in a cast that by the end felt like one big family.

Shonen action shows love to trot out friendship and family as themes, but I thought Kill la Kill managed to handle these themes in a way that didn’t feel rote. There’s a fierce sense of individuality in Kill la Kill. The day is won not by the hero proclaiming “because I have the power of friendship!” but “because I don’t make sense, but I’m okay with that!” Up until the end, the excitement of Kill la Kill came from seeing which new visual gags the show would have, what shocking new twist would be revealed, and generally taking pleasure in seeing the characters fight and interact with another. But by the end, all the threads both literal and metaphorical came together into something really special for me. Everyone in the end mattered, but not as a formless collective, but rather as a group of weirdos with their own independent personalities and quirks. The conflict between Ryuko and Ragyo is personal, but Ryuko succeeds by accepting not just the help of her friends, but her own strange existence. It’s a simple idea that’s been done before, but the crazy weirdness of Kill la Kill managed to package it in a new and endearing way that I hadn’t seen before. 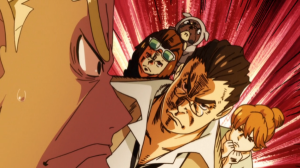 Such a loving family. Also I just love how Kill la Kill uses shifts in art design for comical effect.

There’s been a lot of debate among fans over whether Kill la Kill is a deep series or not. Personally, I have issues with describing a show as “deep”; it’s often used as shorthand for “I really like this show and want to seem smarter for liking it!” which can be annoying. To describe a show as being deep, I’d rather talk about why the show resonates with me and what I got out of it. I think that’s more revealing and more fun than arguing over vague notions of intelligence in a cartoon. Kill la Kill makes its ideas accessible to everyone by announcing them verbally and visually. The first episode invokes the Nazis while introducing the concept of superpowered uniforms to let the audience know that fashion is being used as a metaphor for authoritarianism. Kill la Kill is nakedly open about its intentions. It’s a series based on a pun; fashion is fascism. That it was able to get 24 episodes of nonstop creativity and excitement out of a dumb pun is really impressive.

It may seem odd to say that I love shows as artistically challenging and complex as Revolutionary Girl Utena and Wolf’s Rain and then say the same breath that I love the much simpler Kill la Kill, but Kill la Kill deserves to be uttered in that same breath because it reminded me of why I still watch anime. I watch it because of the medium can be a playground for creativity and stories that would not work in other mediums. Kill la Kill can only work as an anime, and is unashamed of its manic off-putting sensibilities. It’s by no means perfect. The fanservice still presents some problematic male gaze, and the use of molestation later in the series crosses the border of taste that no other part of Kill la Kill did.  But it brought anitwitter together in a way that few shows did. Every week, anime fans would tweet about the new episode and wouldn’t stop talking about it. That’s really damn cool, and the only other show where people were tweeting about it on that scale was Attack on Titan. For as divisive as Kill la Kill could be, everyone wanted to watch and talk about it. I’ve watched it three times, once with my little brother who doesn’t watch much anime but also really liked Kill la Kill. I’d gladly watch it again and spend time with those characters and their world of weird talking clothing.

Day 2 Preview: I talk about the other anime that reminded me why I love animation, Space Dandy!